Not the head on this occasion, but the apex. In times past apicectomy was a quite common procedure, with varying success rates depending on the operator. Now, with the advent of operating microscopes, NiTi files and increasingly skilful endodontic techniques and retreatments, this operation is now quite rare. I have included this in my ‘Tips’ series just because it is now an uncommon operation, and therefore some of the tricks of the trade are becoming lost to future generations of dental surgeons.

Apicectomy has been defined as ‘ the surgical amputation of the tooth root’, was widely used to treat teeth with periapical disease, although there was debate about its exact place, and more importantly, often little consideration given to post-surgical restorative requirements.

It is essential that there is a well condensed root filling, or a post in situ. There must be a sound coronal seal too, otherwise the procedure will fail.

These may be classified into two groups, those associated with cutting, raising, retracting and suturing the flap and those associated with the apicectomy and placing the retrograde root filling. I found that the small headed handpiece made by KaVo especially for apicectomies (Fig 1) was a most useful addition to ones armamentarium. You will also need a carrier of your choice for taking the material to seal the apex, and a ruler.

Most apicectomies are carried out on maxillary anterior teeth. in my experience the palatal anaesthesia will always wear off quicker than labial anaesthesia – see suturing. Maxillary labial needle placement can also be uncomfortable for your patients. When you approach them with your syringe, the natural tendency is for the mouth to open. Ask you patients to close their mouth. You can then turn back the lip, obtain better visualisation of the injection point(s) and inject into relaxed rather than tense tissues. This is much less painful.

The design of the mucoperiosteal flap is determined by the need to give adequate exposure to the surgical site, and the necessity to leave the resulting suture line supported by sound bone. Three flap designs have been suggested (Fig 2). 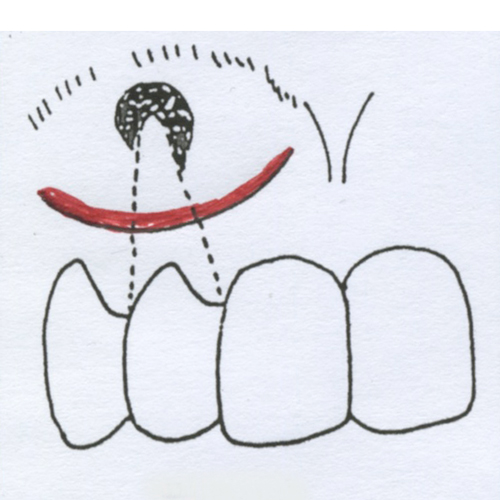 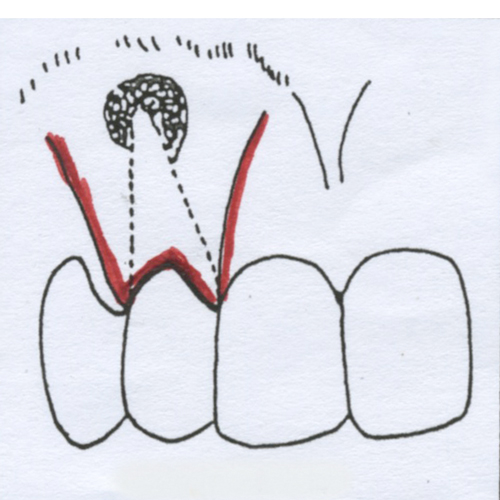 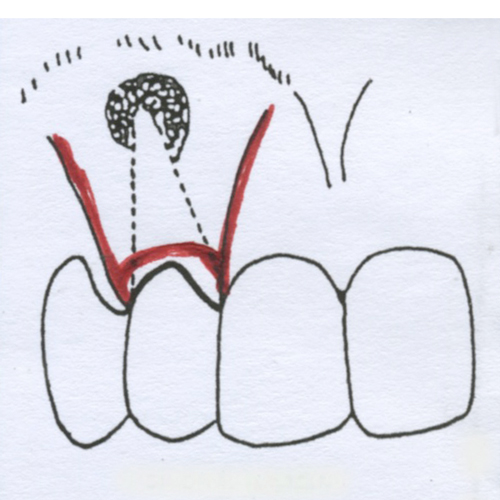 The gingival margin flap is my choice as it gives better access, can be extended and allows a retractor to be placed apically on sound bone. If there has been a sinus there is likely to be a mass of granulation tissue over the apex which needs to be curetted out allowing visualisation of the apex. In other cases the tooth’s apex will be less readily apparent, and it is not unknown to find an intact labial plate of bone. If this happens, then use your ruler, or other measuring device to determine the approximate position of the apex. A useful guide is:

But more accurate estimates can be made from your pre-operative radiograph. Then at this length perforate the labial plate with a No 4 round bur to just reach the apex. Once this has been identified more bone can be removed then any granulomatous tissue removed and preserved for pathological examination. Your chosen Pathologist will be able to supply specimen jars filled with formol-saline for this purpose. This is another essential requirement – there are a few reported cases of carcinomatous changes in apical cyst linings!

The traditional method of root resection is to take a blind cut across the root using a tapered fissure bur, then testing to see if the cut has reached the palatal bone by probing. The probe ‘skids’ on tooth and binds into the haversion bony structure. This approach often removes too much tooth and can create difficulties in ensuring that the root has been fully severed to the palatal aspect. It is technically easier to trim back the apex, top down, until, if present, the root filling or post tip is seen. This trimming is done with the cut surface of the root inclined towards the labial which makes visualisation and probing of any seal easier. The intention is to create a new apex for the tooth at the level of the old seal, and removal of the root should be limited to this aim. The former teaching of resection of the root until sound bone was reached is is likely to impair bony support for the tooth.

An undercut cavity is cut into the root canal area ideally with a inverted cone bur. Here the KaVo special handpiece comes into its own. Whilst amalgam used to be used for the RRF, current practice favours IRM. Various carriers for the RRF material are available, the choice is your to find what works best in your hands.

In the past the apical area was left to heal with new bone formation over time, and this could take many months with large areas. These days bone grafting materials are available to speed the process of new bone formation and I would use then, not least because they may prevent fibrous healing at the labial bone fenestration, with the risks previously described, should the apicectomy fail and an implant be prescribed.

I found that it was very common for the palatal anaesthesia to reduce before the labial anaesthesia. So, when you have just said to your patient that the operation is nearly over and you are ready to place the ‘stitches’ the needle goes through the labial flap without trouble, but as soon as you try to penetrate the palatal tissues, there is a cry of pain. This is not good for your image as a surgeon having just said the apicectomy is nearly complete. For this reason I developed the following method to suture the flap in place (Fig 3) which avoida giving any palatal pain. 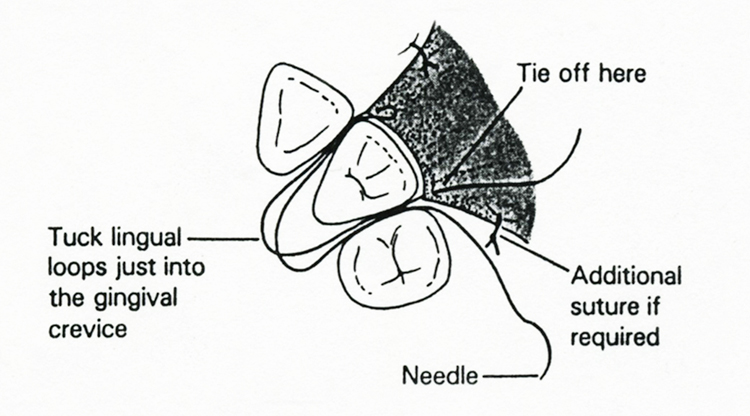 Prescribe your usual post-operative regime and warn the patient not to retract the lip to ‘inspect the wound’ as they can pull out the sutures.

I still prefer old fashioned black silk sutures to dissolvable sutures. This means you see your patient 7 days later for their removal and can monitor progress. You will also need to take post-operative radiographs at intervals for up to a year to monitor bony infill, and take appropriate action should this fail to occur.