Back to the Future

If you were a practising dentist in the early 1950’s modernity meant you would be using an electric motor with cord drive to the handpiece rather than a treadle driven drill. Most burs were made of steel. Cavity preparation was slow, dentistry hard work with long term risks of back problems and varicose veins from the hours spent standing and working around an upright chair.

Then, technology intervened in the form of the air turbine invented in New Zealand by John Walsh (later Sir John) and its US competitor air abrasion. The turbine won on the grounds of its speed of cavity preparation and convenience when compared with the relative slowness and less reliable components of air abrasion, which fell into disuse.

However, in the 1990’s air abrasion which is the use of an abrasive particle, usually aluminium oxide powder in a clean, dry, oil-free gas stream, made a comeback when it was recognised that this technology did have a place in modern dentistry when applied to the appropriate clinical cases. I can unhesitatingly recommend its use. When I adopted this technique in my practice my results improved, and in the case illustrated later proved invaluable.

Firstly we need to consider the physics of the technique which relies on kinetic rather than mechanical energy for tooth preparation. The fundamental equation is:

Where Ek is kinetic energy and equal to the mass of particle multiplied by the square of the velocity of the gas stream. In practice this means that changing the velocity of the gas stream results in an exponential increase in cutting power when compared with the small increases that will result from increasing particle mass. For that reason I recommend only 25 micron size aluminium oxide powder rather than 50 micron, and those units that have reservoirs for both sizes of particle are a waste of money.

The gas stream can be nitrogen or helium from cylinders. These require reducing valves and the usual working pressure is 160 psi or 10 bar. Helium cuts faster than nitrogen because it is lighter, but is much more expensive. Most dentists will use air from their own compressors which usually work up to 120 psi or 8 bar, with a reduction to about 60 -65 psi at the air turbine head. It is easy for your engineer to tap into the 120 psi line for your unit. It also follows from the laws of physics above that air abrasion units working from air turbine lines at 4 bar just cannot have the cutting power of dedicated units working at 8 bar.

The powder/delivery gas mixture is delivered to the tooth via a fine nozzle, but note these is no tactile feedback, unlike conventional mechanical means of tooth preparation, so it will take time to learn how to use the method. Nozzle diameter varies from about 0.3 to 0.6mm with various intermediary sizes depending on the manufacturer of the unit. Although a small diameter will increase velocity and cutting power, I found that 0.35mm diameter was a good general size to use for most applications. Cutting speed can also be reduced by moving the tip further away from the tooth.   Air abrasion cuts enamel and dentine but not soft carious dentine, and always must be kept away from all oral soft tissues.

However, unless controlled, the dust created can be quite messy.   Aluminium oxide powder at 25micron diameter has been regarded as non-toxic. Nevertheless you should wear a mask and eye protection. Good suction is essential, and ideally you should install a dedicated system, for example that supplied by Cattani. Some manufacturers add a water spray to help control the dust, but I found that this hampered vision. Working under rubber dam also helps.

Air abrasion is used in bursts, each lasting only 2 – 3 seconds, when it creates a low energy micro-rough surface ideal for acid etching (Fig 1). 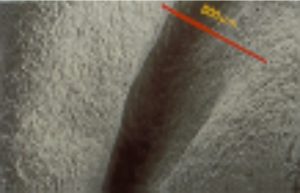 Research suggests that with both an air abraded surface then acid etch restoration retention increases 50 times when compared with acid etch alone. In many cases cavities can be prepared without local anaesthetics or causing pain, but it does not work for crown preparations!

As John Hunter said, what about practical applications:

In summary, air abrasion is a very useful addition to your armamentarium. It enjoys widespread use in the USA where dentists are often asked by patients if they use it. In the UK, we have been very slow to adopt this technology, in part because it does not appear to be taught in Dental Schools.