This may seem at first glance an odd title for ideas in practical dentistry. The reasons will become clear as you read on.

Historically I am aware of two possible origins of the phrase ‘rule of thumb’ and by the same token, I shall offer two dental applications of the rule together with explanations.

The rule is said to have originated in the Middle Ages when millers checked the fineness of the corn they had ground by rubbing it between finger and thumb to determine the texture and smoothness of the resulting flour. For those sailors amongst you, the alternative explanation is of nautical origin. In the early days of sailing ships and their voyages, charts of the sea were relatively primitive although some of the worst dangers were well known. The story goes that the captain put his thumb on the chart at any danger point and knew he had to stand his ship, the width of his thumb, from for example a rocky shoal. Surprisingly, the method works for any scale of nautical chart including the modern highly detailed series published by the Admiralty.

This rule considers the extension of the baseplate of a maxillary partial denture. Place your thumb on the anterior aspect of the study model and draw round it in pencil (Fig 1 and 2). 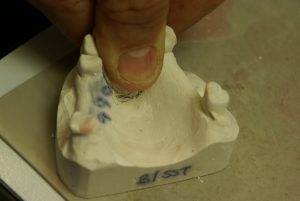 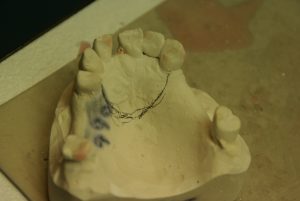 If the circumstances of the case permit (another nautical phrase, this time from the Rules for the Prevention of Collision at Sea) avoid putting the connector into this area. Again the key question is why? Try this test. Sit comfortably and close your eyes. Where is your tongue? Normally it will sit at rest behind the anterior teeth. It follows that, if you can avoid placing the connector in this area, it will be easier for your patient to tolerate the appliance.

If the circumstances do not permit, and it is necessary to place the denture connector in this area, for example when anterior teeth are to be replaced, then it should be as thin as possible. Whilst cobalt chromium may be the preferred material, in many cases it is necessary to use acrylic resin. As acrylic in thin sections is prone to fracture, then reinforce this area with a fibreglass mat pretreated with polymer such as ‘Sticknet’. This material chemically bonds into the acrylic resin to strengthen it as has been demonstrated by an extensive series of physical tests in the materials laboratory. An embedded wire is a weakener, although I recall in the past that the NHS narrative claimed erroneously it was a ‘wire strengthener’!

The second rule relates to the length of toothbrushes. When I have asked patients to bring along their toothbrush to a consultation, so I can determine exactly how they use it to control their plaque (see Tips No 6). I was always surprised at the variety of length of brush they had chosen, and which seemed to have no logic behind the purchase. Patients with small mouths had large brushes and vice versa. It was hardly surprising that their plaque control was poor, and that was before I looked at their method of wielding the said brush. Even worse was parents’ choice for their children ably abetted by the power of advertising (Fig 3). 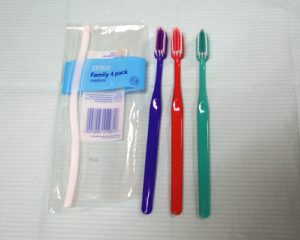 But the heads are 30mm long

Here this ‘family pack’ might be appropriate for late teenage children and their parent(s) but most definitely would be too large for junior school children.

The rule of thumb here is quite simple. Use the length of the patient’s own thumb to determine the ideal length of the toothbrush (Fig 4).

For some reason this works. Perhaps one of our academic colleagues might like to carry out a scientific correlation study?

In this article I have considered 2 non-dental and two dental rules of thumb. If any colleagues can add to the above list I am sure our esteemed Editor would like to hear from them.