Here are the answers to the challenge I set you with more detailed explanations where I think this will be helpful. We will all need to bear these answers in mind when we explore other aspects of occlusion together in the next article

This term relates to the position of the condyle within the glenoid fossa and is independent of any tooth position. The condyle is in an upwards and backwards position, although opinions differ about this, from which hinge movements can take place, the hinge axis. This relation is reproducible time after time, and is the condylar position we seek to find when recording the ‘bite’ in complete denture construction. It is the reference point for all occlusal diagnosis and rehabilitation

The mnemonic is CR = RC; centric relation = retruded condyle. The term term ‘ retruded contact position’ is to my mind a serious misnomer as it suggests teeth are involved when they are not.

The adjective ‘centric’ on its own is meaningless, and need to be coupled with occlusion, relation or stop.

A facebow records the relation ship of the maxillary cast to the hinge axis, and defines the Frankfort plane. When models are set up on a semi-adjustable articulator using a facebow record, the occlusal vertical dimension can safely be increased or decreased simply because the hinge axis has been recorded. This is an essential record when developing customised incisal guidance. There are two main types, the earpiece, for example Denar, or the skin place, for example Dentatus. The Denar type are easier to use as they can be used by the dentist alone. 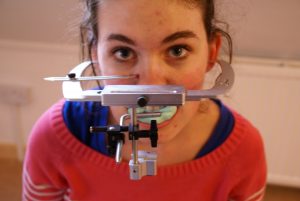 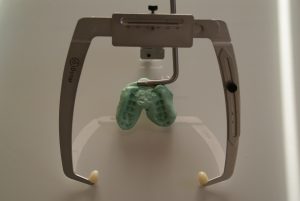 The cartilage of the first branchial arch. It develops into the mandible, and the malleus and incus ear bones. Its sensory and motor nerve supply is the trigeminal nerve.

Masseter, lateral and medial pterygoids and temporalis. These muscles are derived from the first branchial arch, so the motor nerve is the trigeminal.

A condylar joint with 2 compartments separated by an ‘S’ shaped articular disc to which is attached the upper body of lateral pterygoid muscle.. The lower compartment allows for rotational movements, the upper for protrusive and retrusive movements.

A strong lateral ligament which contains proprioceptive nerve endings, the stylomandibular which is the remains of Meckel’s cartilage and the spenomandibular which is a fascial band. Ligamentous support is very weak posteriorly, and this can allow the disc to dislocate anteriorly.

The range varies from 15 to 50 degrees, with a reported average of 27 degrees, hence why this has been chosen for the fixed angle in most freeplane articulators. 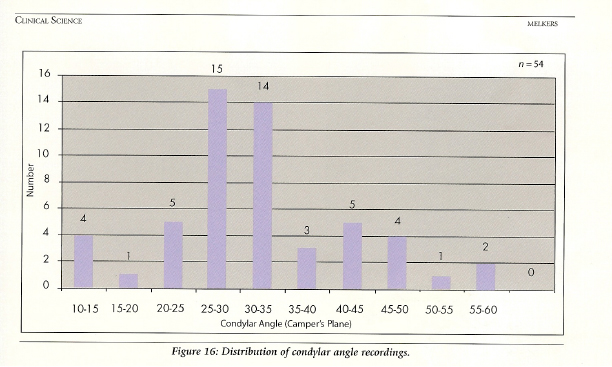 A proprioceptor in striated muscle and part of the gamma efferent system.

This is the term used by athletes to explain the pain and cramp they suffer after strenuous exercise and is due to anaerobic respiration in muscles. Normal or aerobic respiration requires sufficient oxygen to allow for the breakdown of the 6 carbon glucose to 2 carbon fragments in the Krebs cycle during oxidative phosphorylation. These 2 carbon fragments are then broken down to water and carbon dioxide. If there is insufficient oxygen reaching the tissues the usual breakdown product is lactic acid.

There can be no incisal guidance in Angles class II div I with an anterior open bite, Class II div II with a locked occlusion or Class III cases.

When crowning anterior teeth, incisal guidance can be recreated only following taking a facebow record, mounting study casts on a semi-adjustable articulator and making a customised incisal guidance table.

Buccal upper and lingual lower cusps. These are the places to relieve when adjusting the occlusion for working side interferences, but only after centric occlusion has been corrected.

A side to side curve where the posterior teeth are aligned with maxillary buccal cusps on a higher level than palatal cusps and mandibular buccal cusps higher than lingual cusps.

A concept of occlusal function first described by Nagao in 1919. During lateral excursions of the mandible only the maxillary and mandibular canines are in contact on the working side. There is disclusion of the posterior teeth.

In contrast, in group function the buccal cusps of posterior teeth are in contact on the working side.

The diagnostic significance of this in relation to crowning of posterior teeth has been discussed in ‘Going backwards’.

This is a common claim and will be explored in more detail later. TMJ pain is due to muscle spasm. If you believe ‘stress’ causes TMJ dysfunction, please explain why TMJ pain, which is unilateral in the vast majority of cases is caused by a variable factor reportedly acting on the body as a whole?

This is named after the American author of the standard text on occlusion, Peter Dawson. It is a bimanual method to guide the mandibular condyles into centric relation. This is a most important technique to learn and practice routinely if you are serious about the differential diagnosis of TMJ pain, and understanding occlusion.

So, what was your score?